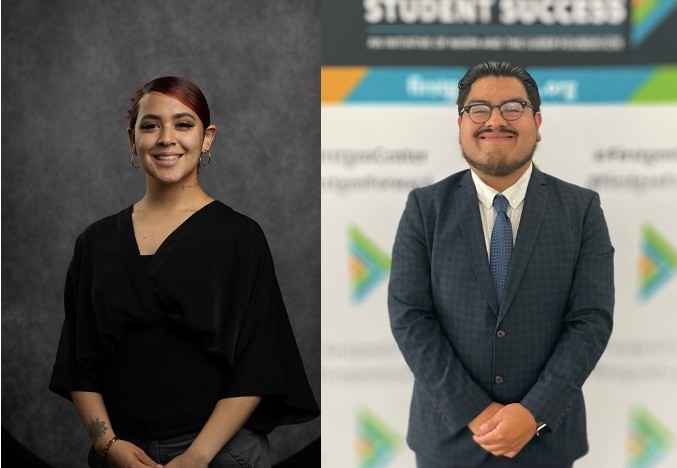 Two College of Education graduate students hoping to research innovative ways to teach and support young people from communities like their own are among this year’s recipients of the prestigious Sally Casanova Pre-doctoral Scholarship.

The California State University initiative helps upper-division and grad students explore doctoral programs where they could pursue their research interests and aims to diversify the ranks of university faculty.

Seventy-six students from 16 CSU campuses were selected including 13 from Cal State Long Beach, according to the Chancellor’s Office.

Both of this year’s College of Education scholars, master’s students Julaina Juarez and Jordi Conde, say the program will be a huge help as they decide when and where to pursue their Ph.D., and where to take their careers in education.

“There’s so much to learn from being around scholars who have integrated research into their work,” Juarez said. “I want to be surrounded by them, learn from them, hear their stories.”

Julaina Juarez says exposure to incarceration is a part of life for many in communities like hers. She, for example, has a father and uncles who’ve served time in jail.

To address the toll that can take on young people, and by extension entire educational systems, Juarez says she’d like to study new ways of training school counselors to support students, including incorporating an approach called penal abolition.

“I’ve always been interested in research, and I have a duty to myself to pursue that interest,” Juarez said.

Juarez is in her second and final year of the College’s Master of Science in School Counseling program. She’s a Texas native who grew up in San Bernardino and earned a bachelor’s degree in sociology from UCLA in June 2021.

One of her own career aspirations is counseling at the high school level. She likes the idea of having four years to work with students, helping them pursue a trade, community college or four-year university education, and serving as a role model.

“As a person of color, a woman, first-gen, also impacted by incarceration and coming from a low-income Black and brown community, I went to UCLA,” Juarez said. “And that’s not something a lot of people are surrounded by. I can show students who identify with communities like my own that with support, they can belong in these spaces of academia, too.”

CSU faculty mentors help students apply for the Sally Casanova scholarship. Then they help recipients by accompanying them on site visits or to professional meetings, sharing information about careers, and ensuring they are ready for a Ph.D. program.

Juarez’s faculty mentor is Dr. Jacob Olsen, an associate professor in the Advanced Studies in Education and Counseling Department at CSULB. In addition to helping her polish her scholarship essays and develop research questions, Olsen was just there for her, she said.

“Sometimes supporting means, ‘Oh, Julaina, how’s it going?’ or ‘Oh, Julaina, just checking in to see if you need anything,’” Juarez said. “Just knowing he’s there for support when and if I need it is so valuable.”

When the CSU Board of Trustees approved an ethnic studies course requirement in late 2020, Jordi Conde wondered: Will it make students feel more connected to their community? How about to other communities? And how might it affect their identity development, now and in the years to come?

Conde is exploring those questions in his master’s thesis at CSULB, and with support from the Sally Casanova scholarship wants to explore doctoral programs where he can expand his ethnic studies research. He’s interested, for example, in comparing the ethnic studies programs of different CSU campuses and how the University of California system might implement a similar mandate.

“Getting the Sally Casanova is going to allow me to think some of these things out and go from there,” Conde said.

He’s looking at programs at the UC Berkeley, San Diego, Riverside and Los Angeles campuses. It would be a coming home of sorts. Conde earned BAs in Politics and in Latin American & Latino Studies from UC Santa Cruz in June 2018. He’s currently in his third and final year of CSULB’s Master of Science in Counseling, Option in Student Development in Higher Education program.

One reason Conde wants to continue his studies at a UC is that he feels safer in California as an undocumented resident. Born in Mexico City, he and his “humble lemon vendor” parents settled in southeast Los Angeles when he was 6 years old. Conde has since secured protection from deportation under the Deferred Action for Childhood Arrivals program and is grateful for it.

Conde is pondering a future in either the academic or student affairs side of higher education, saying through high school, junior college and four-year universities, many of his role models have been educators.

“My whole life I’ve connected with educators,” he said. “The way they taught they made it personal; they didn’t talk above you they talked with you. It’s a conversation. That’s what I enjoyed and so that’s what I want to replicate.”

Conde’s Sally Casanova faculty mentor is Associate Professor Jonathan O’Brien. Conde says O’Brien and Professor Don Haviland have guided him every step of the way through his master’s program through thoughtful instruction, help with thesis development and thinking through his doctoral aspirations.

“I give them both credit, I give them both appreciation because even though they’re not ethnic studies-trained faculty, they’ve both been able to extend a helping hand, guide me in the right direction,” Conde said.

The Sally Casanova Pre-doctoral Scholars Program provides students a $3,000 stipend and summer research experience to help them explore whether to enter a doctoral program and prepare them if they do.

Students can, for example, use the funds to visit doctoral-granting institutions, participate in research at those institutions, travel to symposiums, subscribe to journals and cover application and test fees.

The program was launched by the late Dr. Sally Casanova, who worked in the Chancellor’s Office in the 1960s and later served as associate vice president for academic programs and dean of graduate studies and research at California State University, Dominguez Hills.

Over the last 34 years, the program has awarded more than 2,300 scholarships to students in the CSU. A review panel looks for students who demonstrate academic excellence during times of economic or educational disadvantage and a commitment to a career in higher-education instruction or research.