The CSULB College of Engineering's Centers, Institute, and Labs provide the cutting-edge equipment and facilities to advance knowledge and understanding in many fields of engineering research—from manufacturing and aerospace to energy, transportation, and assistive technology. Whether it be studying the properties of new metals and compsites or evaluating new manufacturing processes, the work conducted advances the field and provides opportunities for student and faculty research. Many of the labs and centers are supported by industry partners such as Boeing and DENSO.

The National Center for Transportation, Green Technologies and Education (TransGET) was established in 2009 to conduct interdisciplinary research and development, technology transfer, and education in transportation and green technologies. The center is the main platform for providing the Joint Training and Certification Program for Caltrans and the industry and to perform research in transportation. The center brings together transportation researchers from different disciplines to collaborate on infrastructure research and applications, freight movements, mobility and optimization, technology development, and education and outreach.

Established in 2014, I-MAT conducts research and development in partnership with industry and state and federal agencies. I-MAT focuses on person-centered design and human system integration, aerospace manufacturing and assembly, rapid prototyping and integration, composite manufacturing, nanofabrication, and systems engineering. The institute provides opportunities for faculty and students to engage in multi-investigator and interdisciplinary R&D. I-MAT's advisory board includes members from Boeing, Northrop Grumman, Raytheon, and automotive design and manufacturing companies.

The Analytical Instrumentation Lab is dedicated to material characterization and development of new instruments for biological and chemical analysis.

This low-speed, closed-circuit tunnel was donated by Boeing in 1993. The tunnel has a 96.5 X 137 X 305 cm working area, and a 10:1 contraction with a maximum free-stream speed of 90 m/sec. The settling chamber features a honeycomb and six screens for flow conditioning. For speeds less than 50 m/sec, the free-stream turbulence is less than 0.02 percent and the non-uniformity in the flow across the test section is less than 0.1 percent per 5 cm.

The tunnel also has a Laser Doppler Velocimetry (LDV) System, a single component, off-axis, forward scatter collection. The clear collection aperture is 40 mm and the transmitter focal length is 300 mm. Fringe separation is 6 microns. The laser used is a Lexel Argon-Ion model 85 with maximum power output of 1 watt. It has photomultiplier and associated signal conditioning electronics and frequency domain single-component signal processor with a PC driver software.

This lab contains a sizeable autoclave that can be used for curing the composites that researchers design, cut, stitch, and fabricate. The 5-foot by 3-foot autoclave can accommodate large objects and heat to 800 degrees Fahrenheit and 415 psi.

The DENSO Lab offers CSULB students facilities for computer-aided design, manufacturing, and non-destructive testing. The lab contains an assembly robot, a Computer Numerical Control (CNC) milling machine with the ability to machine parts precisely, and 3D printers to rapidly prototype three-dimensional solid objects of virtually any shape from a digital model. Stored nearby is a plasma cutter used to precisely cut steel and other metal materials of different thicknesses.

The Dynamics and Control Lab focuses on:

This lab is equipped for aerodynamics, bio-fluids, and computational fluid dynamics (CFD) research.

The Human Performance and Robotics Lab's research projects range from musculoskeletal modeling to robotic control. HPRL has received grants from DENSO, the National Science Foundation, and the National Institutes of Health and collaborates with various departments and institutions to engage in interdisciplinary research.

This large-scale testing facility provides equipment for static, fatigue, and creep tests. The lab, which has supported NASA and Boeing research programs, contains 11 Instron servo-hydraulic testing frames (ranging from 22- to 110-kip capacity) with computer-controlled thermal chambers capable of temperatures from -80 to 700 degrees Fahrenheit. The Instron Lab also has humidity and thermocycling chambers.

Currently under construction, this lab will provide students and faculty a facility to explore this growing construction specialty.

The Microfabrication Lab is dedicated to photolithographic processes and 3D printing for developing and fabricating microfluidic chips that find various applications at the interface of biology, chemistry, and engineering.

Our group aim is developing new physics-based models and numerical algorithms for predicting the large scale multiphase and complex fluids flows in broad areas of fluid mechanics, such as energy and the environment. The foundation of our research is at the scientific interface of Computational Fluid Dynamics (CFD) and multiphase flows. The focus is on disperse multiphase flows (often reacting flows) with a continuous phase (gas or liquid) surrounding one or more disperse phases (e.g., particle, drops, or bubbles).

The Multiphase Flow Lab pursues interdisciplinary and multidisciplinary research directions in Chemical Engineering. Dr. Sara Moghtadernejad studies processes and phenomena involving fluid and powders that depict phase changes and have multiple states. Her research arises from practical applications, with the aim of solving challenging and contemporary industrial issues. MFL is a result-oriented laboratory and is equipped with state-of-the-art tools to closely reproduce real-life conditions and to design various interesting experiments. Those are followed by distinct numerical and statistical analyses to verify experimental observations and to provide solutions, enhancements, and corrections.

The lab focuses on:

The Polymer and Advanced Composite Laboratory specializes in developing and characterizing new lightweight materials and processes for applications in aerospace, biomedical, automotive, and other related industries. In particular, the research lab focuses on:

The Solid Propulsion and Combustion Laboratory (SPACL) focuses on understanding the physics and chemistry of ignition, combustion, and decomposition of energetic materials, solid propellants, and other fuels/oxidizers. Traditional and novel experimental techniques are used to probe both gas-phase and condensed-phase reactions. These measurements, in conjunction with complementary modelling efforts, provide insight into how to improve performance or improve safety of combustion applications. 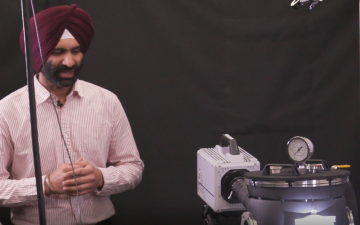 In his STEAM-i Lab, Dr. Navdeep Singh Dhillon focuses on the use of experimental high-speed optical and infrared imaging techniques as well as CFD methods. Watch video 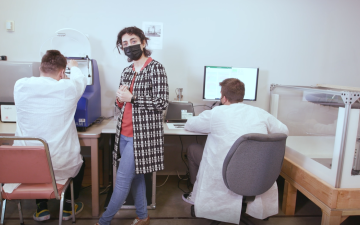 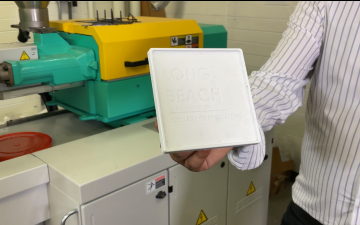 Dr. Ehsan Barjasteh discusses the materials science and manufacturing research being conducted in his Polymer and Advanced Composite Lab. Watch the video.