Designers In Their Own Words

Through the years, the Duncan Anderson Design Lecture Series has invited top professionals to share their knowledge and experience with design students at CSULB. This coming year marks the expansion of that series to a bi-monthly event. Thanks to Cecelia Anderson-Malcolm and the Duncan Anderson Endowment, CSULB now has an ongoing design lecture series to rival those at private design schools. The CSULB Industrial Design Program is working closely with IDSA-LA, and its student chapters, to schedule an exciting line-up of speakers. Please let your chapter officers know of professionals you want to meet and hear at future events.

Due to Covid-19 campus closure and safety, all lectures for the Fall season will be via Zoom only. Each lecture will have a specific Zoom ID. If you're interested in attending, please contact this year's Guest Speaker Coordinator, Wesley Woelfel or the department for the specific Zoom ID.

In this highly experiential workshop, you will:

Kristen Peterson brings a big dose of passion, energy & infectious can-do mentality to her work as an Innovation Catalyst as well as 20 years of hands on experience for global clients such as Clorox, Disney, Google, Intel, Kellogg’s, L’Oréal, Michigan State, University, Ontario College of Art & Design University, PepsiCo, Pzifer, Starbucks, Wavemaker. She is the former Director of the Creative Problem Solving Institute and a founder of Mindcamp. She holds an MSc in Creativity and Change Leadership from the International Center for Studies in Creativity at the State University of New York at Buffalo. For fun and to stretch her brain Kristen completed the Improvisation Program at the Second City, Toronto.

Since Adolf Loos’ statement that ‘ornament is crime’ and the subsequent Bauhaus movement, minimalism has held its own as a strong design concept. But does it satisfy consumers’ emotional demands? Could ornament and decoration be a solution? If there is minimalism is there also ‘maximalism’? The lecture will explore the expectations towards design and discuss solutions.

Wolfgang Joensson is a South African born German industrial designer and educator. He lives in Paris, France and Corona del Mar, CA. Throughout his career he has worked with international clients ranging from small startup companies to industrial giants, creating award-winning product, graphic, interface and package design which can be found in shops and museums worldwide. He is also the co-founder of a start-up company for sleep technology out of San Diego, CA, and a book author. He likes cocktails, cooking, culture and conversation with clever people.

Imagine a world where everyone took responsibility for a need in their community and dedicated a portion of their time and talent to design a solution. As a designer we are given a unique ability to see what things could be not just what they are...apply that to making a difference and you won’t just design homes, you could end homelessness.

Catie graduated from CSULB in 2010 with a BA in Design. She worked for Tangram Studio (now Studio Other) as an industrial designer designing custom furniture for 7 years before leaving to pursue building Pen + Napkin in 2014. Pen + Napkin started out serving families locally in Southern California, but now has reached families accross the nation. Over 280 de-signers in over 48 states have signed up to do a Pen + Napkin installs in their community.

When people find out I have worked and volunteered in over 45 countries in the last decade, they are impressed — but what they don’t know is that the cause of me constantly moving came from a place of anxiety. In this lecture, I will share my experience, failures, and learnings as a creative: things I wish someone told me when I was in your shoes.

Originally from the United States and currently based in New Zealand, Tee Tran is a Visual De-signer who has had the privilege of working and volunteering in over 45 countries. At the moment she is freelancing, and has previously worked for and with clients such as Adidas, Kelly Slater, and Pitch.

We all have an inheritance. We all have a story. You are invited to join the Inheritance Project for an interactive virtual workshop to begin unpacking your unique inheritance* and uncover, what makes you...you?
You will leave with not only a deeper understanding of yourself and others, but also 5 practical leadership tools to begin to build trust and create a culture of belonging within any group. Learn more about the Inheritance Project here.

A Singaporean-French-American citizen raised in London, Mallory has always been fascinated with identity and facilitating cross-cultural understanding. In her 10+ years of consulting and facilitation experience, she has worked with Fortune 100 C-Suite execs, non-profits, city government agencies, universities and start-up founders. Her work has ranged from healing community race relations through the Sustained Dialogue process to working at the Deloitte Greenhouse, designing and facilitating highly customized workshops on strategy, design thinking, and innovation.
Now, as a co-founder of the Inheritance Project she leads transformative experiences for diverse groups to create understanding, trust and collaboration. She is passionate about empowering young leaders with the skills and self-awareness to lead in a diverse, global and uncertain future.

Figuring it All Out

Since graduating from California State University, Long Beach, I have been working to trans-form the way people experience a company’s product. As a Designer, it is an absolute joy to observe how a product’s environment can create a one-of-a-kind experience and a lasting memory for consumers and brands.

I’m currently a Senior Designer at Sparks, A global Brand Experience Agency that focuses on creating human connections for our clients both virtually and in person. I have worked on de-signing for events, tradeshows, permanent installations, retail, and a few virtual events since the Pandemic.I’m a Long Beach native, a first-generation American, and the product of two of the hardest working people I know. They have not only nurtured me and supported my pas-sion, but they have instilled in me the values I practice in both my personal and professional lives. My upbringing has empowered me to express my creativity and embrace failure as an opportunity for growth.

Marc is the founder and chief designer for Lifestyledesign in California. Lifestyledesign creates powerfully emotive and resonating products for world-leading brands in categories ranging from consumer electronics, lifestyle, outdoor, and action sports to medical, furniture and eyewear. Founded in 2002, Lifestyledesign works together with existing brands and startups to bring new­ness to market to help its customers thrive in competitive markets. Prior to starting Lifestyledeis­gn, Marc was the director of product design for BMW Designworks in California. In this role, Marc was involved in the development of crucial design achievements where he managed cross-func­tional teams through the design and development of products and services in a broad array of sectors for Fortune 500 companies and well-known brands such as BMW, Mini, Nokia, Nike, Adidas, Siemens, Motorola, and many others.

An immersive overview of Michael Gericke’s career at Pentagram and his work that has focused on celebrating places. telling stories and making symbols.

Michael Gericke’s images and programs are known for their simplicity and clarity, and often portray the essential qualities of the object or topic he is representing. Michael’s work lies at the intersection of image-making, communications, and the built environment. It encompasses a wide range of design areas, including visual identities, environmental graphics, posters, e-media, exhibitions, books, and advertising.

His visual identities are widely seen and include “One Laptop Per Child” - an initiative with MIT that provides low-cost computers to underprivileged children around the world. PRI-Public Radio International; the Big Ten athletic/collegiate conference, the “AirTrain” that connects Manhattan to New York’s airports, the world’s largest sporting event - the FIFA World Cup; and the identities and advertising for Rockefeller Center and its Rainbow Room, and the iconic Top of the Rock Observation Deck.

Michael is the author of Graphic Life, published by Images Publishing, an immersive monograph with 40 years of work that has been driven by a celebration of places, telling stories, and making symbols. Named one of the best design books of 2021, it includes a preface by celeberated architect Moshe Safdie and a retrospective essay by Pulitzer Prize winning design critic Paul Goldberger.

Additionally, teD’s residential clientele represent an elite list of tastemakers with an affinity for Edmonds’ original and fresh approach to design.

Whether you know it or not, the way you solve problems is your superhero creativity strength! Seriously. It’s what sets you apart when taking on a challenge. And, it’s important you use your powers for good, and know when to pull in others’ superpowers to innovate. (There’s even an IBM whitepaper proving that teams who understand this create successful solutions that make it to market). With new challenges presenting themselves every day, your ability to think different¬ly, adjust nimbly, and innovate solutions is more important now than ever before.

In this special interactive virtual workshop, keynote speaker, entrepreneur and challenger strat¬egist Sura Al-Naimi will help you to:

Since 2001, Sura has been in the world of innovation and creativity. She is a former Disney Global Innovation Officer at their internal think tank, B2B tech and luxury jewelry entrepreneur, and challenger strategist at the What If Innovation Group, Synectics and EatBigFish. Sura has bridged the worlds of startups and Fortune 100 organizations. Disney, Hyperloop, Facebook, Chick-Fil-A, Levis, Kaiser Permanente, Barilla to name a few. She is the founder of HiHelloSura, and an adjunct at Ray Kurzweil and Peter Diamandis Singularity University.

Big picture - she will help you use innovation and creativity frameworks, tools and mindsets to help you solve whatever problem you have; find solutions together - the opposite of ‘you come in and tell us what to do’. Sura has spoken globally at innovation conferences, corporations and associations. She unleashes a growth mindset in delegates as they are invited to consider what is possible when they think differently together, collaborate to create big change. She relishes the opportunity to experience different cultures, having moved 11 times by the time she was 11, coming over to the United States from London, in 2006. She is a Seth Godin AltMBAer and Hive Leadership alumni.

Real Design for an Imaginary World

For decades Phil Saunders has been bringing believable design to genre entertainment in movies, computer games, and theme park rides. What’s the secret? Simply applying the same Industrial Design principles and methodology you would for any real-life product to the devel­opment of fantasy props, vehicles, characters, creatures and environments. Come see how as Phil discusses why his I.D. education prepared him for a career in entertainment.

Since 2001, Phil Saunders has been contributing his designs for characters, vehicles, environ­ments and props to feature films from nearly every major studio. His involvement with Marvel Studios began with the first Iron Man film, and has continued through almost every Marvel production that has featured the popular character, including all four Avengers films. Phil’s pro­duced credits also include three Spiderman films, Shang-Chi: The Legend of the Ten Rings, WandaVision, Star Wars: The Rise of Skywalker, Tron: Legacy, Zathura, Cowboys and Aliens, Kingsman: the Golden Circle, The King’s Man, and the upcoming Black Panther: Wakanda Forever. For the decade previous to his work in film, he was the creative director for computer game developer Presto Studios, an automotive and product designer for Nissan Design Inter­national, and a freelance designer of location-based entertainment.

Visit and revisit lectures you missed on BeachTV. If you see this logo next to the lecturer, then their lecture is online!

Parking is available at the “Foundation Lot” located on East University Drive, across from the main entrance to the Design building.

For more information on university parking policies and the most current rates, please visit Parking Information. 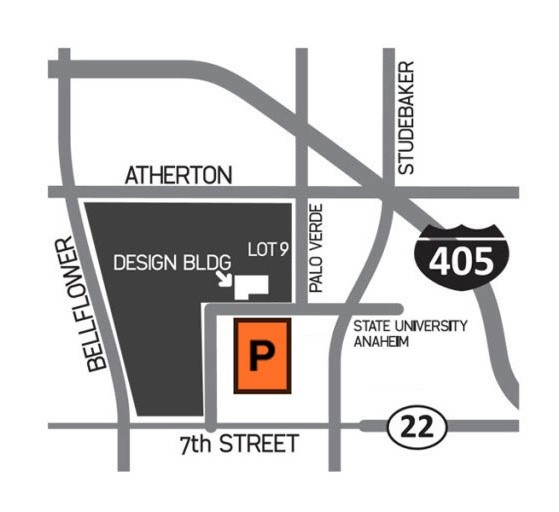