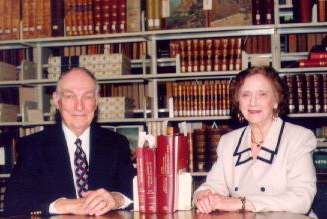 The Crawford Coleridge Collection, established in 1985, is based on and continues to benefit from gifts from the personal library of Professor Emeritus Walter B. Crawford and Ann M. Crawford, and it is supported in part by the Crawford Coleridge Collection Endowment. It is not intended to be a collection of expensive first editions of Coleridge's works, or of original Coleridge-related art, collected for their rarity and monetary value, although many of the items are rare and valuable. Rather it is designed as a working collection of materials in all the categories covered in Samuel Taylor Coleridge: An Annotated Bibliography of Criticism and Scholarship (3 vols., 1976, 1983, 1996, and the selective Supplement 2003), along with a convenient reference collection pertaining to English Romanticism, Coleridge's contemporaries, and earlier authors in whom Coleridge was particularly interested. The principal criterion is the usefulness of the materials to scholars with special research interests in Coleridge and his contemporaries during the English Romantic Movement and their influence down to our own time, as well as to any readers desiring to see hard-to-find items annotated in the Bibliography, especially in the Crawford volumes, or to learn other locations of those items.

Acquisition priority is given to items appearing in the existing volumes of the Coleridge Bibliography, as well as items expected to appear in future volumes. First priority is given to items essential or important for basic Coleridge research and study, especially work in fields of Coleridge study hitherto neglected, thus also unique or highly unusual items, and items not likely to be listed in other bibliographies under Coleridge but containing substantial Coleridge-related material--more particularly, items in the following overlapping Bibliography categories listed roughly in the order of their priority: