How Do Reef Fishes Use Offshore Petroleum Platforms?

Offshore oil platforms create artificial reef habitats in which diverse groups of marine life accumulate. However, a problem arises when once-productive platforms become obsolete. A State Rigs-to-Reef program would introduce several alternatives for dealing with obsolete oil platforms besides full decommissioning, which include topping, partial removal, toppling, or leaving in place (Fig. 1). However, to determine whether these are worthwhile options it is first important to quantify the ecological significance of these structures for marine organisms.

While the Rigs-to-Reefs Program has been applied to hundreds of platforms in the Gulf of Mexico, managers of the California oil platforms are still undecided. Since oil platforms provide new habitats for marine animals, the method in which they are decommissioned may have serious effects on the diversity and survival of established populations. Determining community structure, abundance and behavior of fishes associated with offshore platforms has helped managers determine how different decommissioning options change the importance of the artificial reef habitat. While community structure studies provide researchers with an idea of the marine fish that colonize the platforms, acoustic telemetry studies are essential to determining behavioral patterns of abundant populations (e.g. site fidelity, homing behavior, etc.). Oil platforms in the San Pedro Shelf and Santa Barbara Channel have been studied to address these questions (Fig 2).

If you would like to learn more, please watch VIDEO: Rigs to Reefs Initiative.

Lowe et al. (2009) conducted a study in the East Santa Barbara Channel, in which they studied the site fidelity and movement patterns of groundfishes that were associated with offshore petroleum platforms (Fig. 3). Fifteen species were caught and surgically fitted with acoustic transmitters. Acoustic receivers were places on nearby support vessel moorings and within the platform structures to monitor for emigration of tagged individuals. Results showed that the degree of site fidelity varied among platforms and across species (Fig. 4). In addition, there was evidence of fish moving from shallower platforms to deeper platforms over time, indicating possible ontogenetic depth shifts with age.

Anthony et al. (2012) used the resulting data and methods from Lowe et al. (2009) to study translocation, homing behaviors, and habitat utilization of lingcod and rockfishes caught at the same platforms in the Santa Barbara Channel. Lingcod and rockfishes from three oil platform locations were translocated to natural habitat of similar depth at Anacapa Island, in order to determine whether the animals were capable of returning to their home platform. The purpose of this study was determine the potential efficacy of successfully transplanting fish from platforms to be potentially fully decommissioning to natural, overfished habitats, to mitigate loss of fish life during the full decommissioning process. However, the success of such an effort would depend on whether translocated fish would home back to the platform they were captured at or whether they preferred natural habitat over that of platform habitat.

Of those tagged, nearly 25% of individuals exhibiting homing behavior (Fig. 5, 6). Translocated lingcod were found to home back to their platform of capture in as few as 10 hrs! (Fig. 7). Furthermore, lingcod and rockfish showed different movement patterns while homing, illustrating differences in movement patterns and homing across species (Fig. 8, 9).

Each of these studies suggests that some species have a relatively high affinity for artificial reef habitats and decommissioning efforts may significantly change habitat structures. Furthermore, although relocation efforts were successful for some individuals, the process is both costly and time consuming.

There are 7 active petroleum platforms on the San Pedro Shelf and while limited data exists, the upper reaches of these platforms appear to be dominated by reef fish species such as blacksmith and California sheephead.

Mireles (2010) simultaneously conducted a study to measure the site fidelity of four commercially important fishes at two oil platforms in the San Pedro Shelf. Fifteen adults of each of four species (CA sheephead, cabezon, kelp and grass rockfish) were acoustically tagged and monitored for 1.5 years (Fig. 15, 16). Ten of the fifteen tags just detected the presence or absence of the individuals, and the five additional tags had depth sensors. Results showed that each species had a high degree of site fidelity and that most species remained within shallow waters. Each species showed diel behavior, with sheephead traveling the greatest distance between day and night. However, this movement, as well as the depth distribution of cabezon, appears to change depending on the season. Since the animals remain within shallow waters, any decommissioning effort that removes the platform above 55 meters depth would eliminate essential habitats that are occupied by each of the studied species. 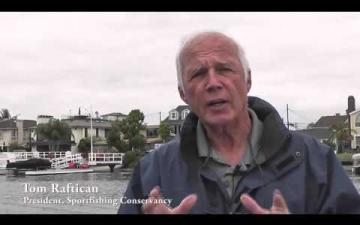