The Late Ordovician mass extinction, which reduced species diversity more than 50%, has been linked to the expansion of Gondwanan ice sheets, global cooling and the restriction of climatic belts, a prominent eustatic sea level fall and subsequent rise, and changes in oceanic upwelling, nutrient abundance, and water chemistry. Stenotopic faunas that became entrenched after millions of years of environmental stability were decimated by rapid perturbations in multiple earth systems. Sharp excursions in the isotopic composition of marine carbon suggest massive disruption of the carbon cycle, and sedimentological evidence indicates the rise and fall of a major glacial episode. However, critical relationships between various biologic and secular changes remained poorly defined, despite numerous detailed investigations utilizing many stratigraphic sections worldwide. 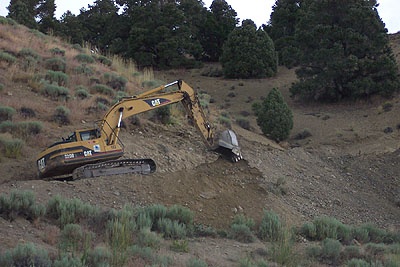 In late 1994, in the course of studying the stratigraphy of the Roberts Mountains allochthon in its type area in the Roberts Mountains of north-central Nevada, I discovered a stratigraphic section in the uppermost Vinini Formation along Vinini Creek that preserves outstanding uppermost Ordovician paleontological, sedimentological, and geochemical records in deep-marine, lower slope to continental rise depositional facies. It is the only section known that allowed the important graptolite and conodont biostratigraphies and clear sedimentological and geochemical records to be correlated directly with each other.

In addition, it could be compared in detail to a coeval stratigraphic succession in the nearby Monitor Range that represents a much shallower, outer shelf to shelf margin depositional setting and also includes distinct paleontological, sedimentological, and geochemical records. Accordingly, NSF funding was secured and a major research initiative was launched. In 1996, the Vinini Creek section was fully exposed by bulldozer and a diverse team of specialists studied and collected it as well as sections in the Monitor Range and at Lone Mountain. The results were presented at the 1997 GSA Annual Meeting in Denver and published.

Publications arising from this research include:

A monograph of the graptolite fauna is being prepared along with other papers on the graptolite mass extinction. In addition, the Vinini Creek and Monitor Range sections are being investigated again as part of a worldwide study of the Late Ordovician graptolite extinction. Graptolites were systematically collected from the Vinini Creek section in summer 2005, and the Nevada sections were re-sampled for geochemistry. The results will be compared will those from sections in China, Arctic Canada, Scotland, Russia, and Barrandia. The project is led by Chuck Mitchell (SUNY-Buffalo) and besides myself involves the graptolite specialists Mike Melchin (Antigonish, Canada), Petr Storch (Prague, Czech Republic), Tanya Koren (St. Petersburg, Russia), and Chen Xu (China), as well as Chris Holmden and Dan LaPorte, geochemists from Saskatoon, Canada.