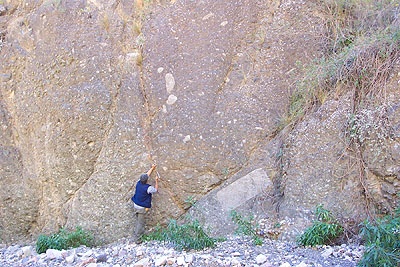 The Argentine Precordillera is a thin-skinned thrust belt immediately west of the Frontal Cordillera of the Andes in northwestern Argentina composed largely of Cambrian to Carboniferous strata. The Cambrian-Ordovician strata of the Precordillera as well as other small outcrops of Ordovician strata and "Grenvillian" basement rocks define allochthonous terrane that is called Cuyania. At the GSA Penrose Conference held in San Juan in 1995, the consensus opinion was that the Cuyania (or greater Precordillera) terrane rifted from the Ouachita margin of Laurentia in the early Cambrian, drifted across the Iapetus Ocean as a microcontinent, and accreted to the proto-Andean margin of Gondwana in mid to late Ordovician time A variety of stratigraphic, paleobiogeography, paleomagnetic, and geochemical evidence is cited in support of this Laurentian microcontinent model.

My colleagues and I, however, have come to a different opinion on the basis of U-Pb geochronology of detrital zircons from Cambrian to Carboniferous sandstones in Argentina. We conclude that the provenances of these sandstones are largely Mesoproterozoic, Neoproterozoic, and early Cambrian basement rocks of Gondwana, which requires Cuyania to have a Gondwanan origin even though it is allochthonous, and our evidence as well as that cited in support of the Laurenitan origin are fully consistent with the parautochthonous model, in which Cuyania rifted from the southern margin of West Gondwana and beginning in the Mid Ordovician, migrated along a transform fault until arriving at its present position in Devonian time.

This work began in collaboration with James Gleason of the University of Michigan as part of a Nd isotope chemostratigraphic investigation. Field work in Argentina has depended on collaboration with Argentine and Uruguayan colleagues, S. Peralta, S. Heredia, C. Gaucher, D. Poire, and G. Aceñolaza. U-Pb analyses of zircons have been carried out by George Gehrels of the University of Arizona using the LA-MC-ICPMS at the University of Arizona Geochronlogy Laboratory and by Marty Grove of UCLA using the ion microprobe at the UCLA SIMS laboratory. Kathleen Marsaglia of CSU Northridge has provided petrographic descriptions and interpretations of all sandstone samples analyzed. The research has been supported by by the Petroleum Research Fund of the American Chemical Society, the National Science Foundation, Universidad Nacional de San Juan, and California State University at Long Beach.

Some papers resulting from this research are: