The College of Natural Sciences and Mathematics offers Cal State Long Beach students many opportunities for research as a way to enhance their education. Here are three varied glimpses of research currently being conducted within the Biological Sciences department. 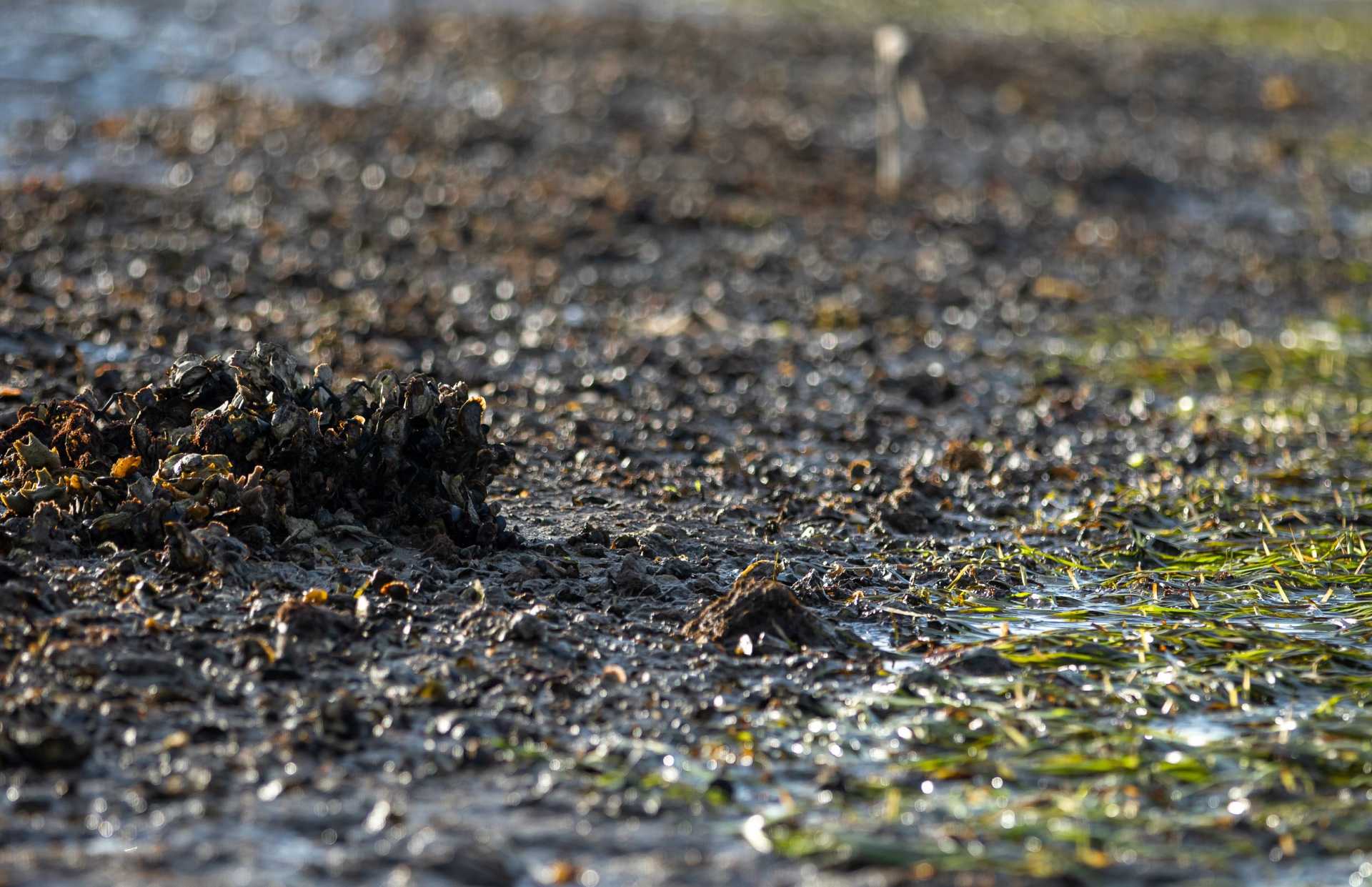 In Dr. Christine Whitcraft’s Wetlands Lab, biology students are looking for solutions that could help save the planet. Not with revolutionary technology or clever slogans, but with native Olympia oysters and eelgrass. Call it nature’s technology.

In the last few years, Cal State Long Beach students, in partnership with Orange County Coastkeeper and Cal State Fullerton, have looked to prevent further degradation of the ecosystems in the nearby wetlands by restoring oysters and eelgrass. These two facets will help stabilize and protect shorelines while preserving valuable habitats and ecosystems.

How can this help? Graduate students Cody Fees and Elishebah Tate-Pulliam are researching how fish, invertebrates and epifaunal organisms (animals that live on the sediment surface) are using the oysters and eelgrass beds. They are using controlled scenarios with no oyster or eelgrass restoration, oyster beds only, eelgrass only and a pairing of oysters next to eelgrass.

“I’m hoping to see that the pairing of the two important habitats attract a more diverse and abundant array of wildlife,” said Fees, a biology major.

Tate-Pulliam, who earned her B.A. in molecular science, is focusing her research on the invertebrate community that has developed among the oysters and whether there has been a significant increase.

“I’m hoping to see if there is some consistency, some trends and that way I can determine if there is a specific type or specific group of invertebrates that like certain types of restoration methods,” Tate-Pulliam said. “Maybe some of them like the oysters more, maybe some like being paired better with eelgrass. No one has ever looked at that.” 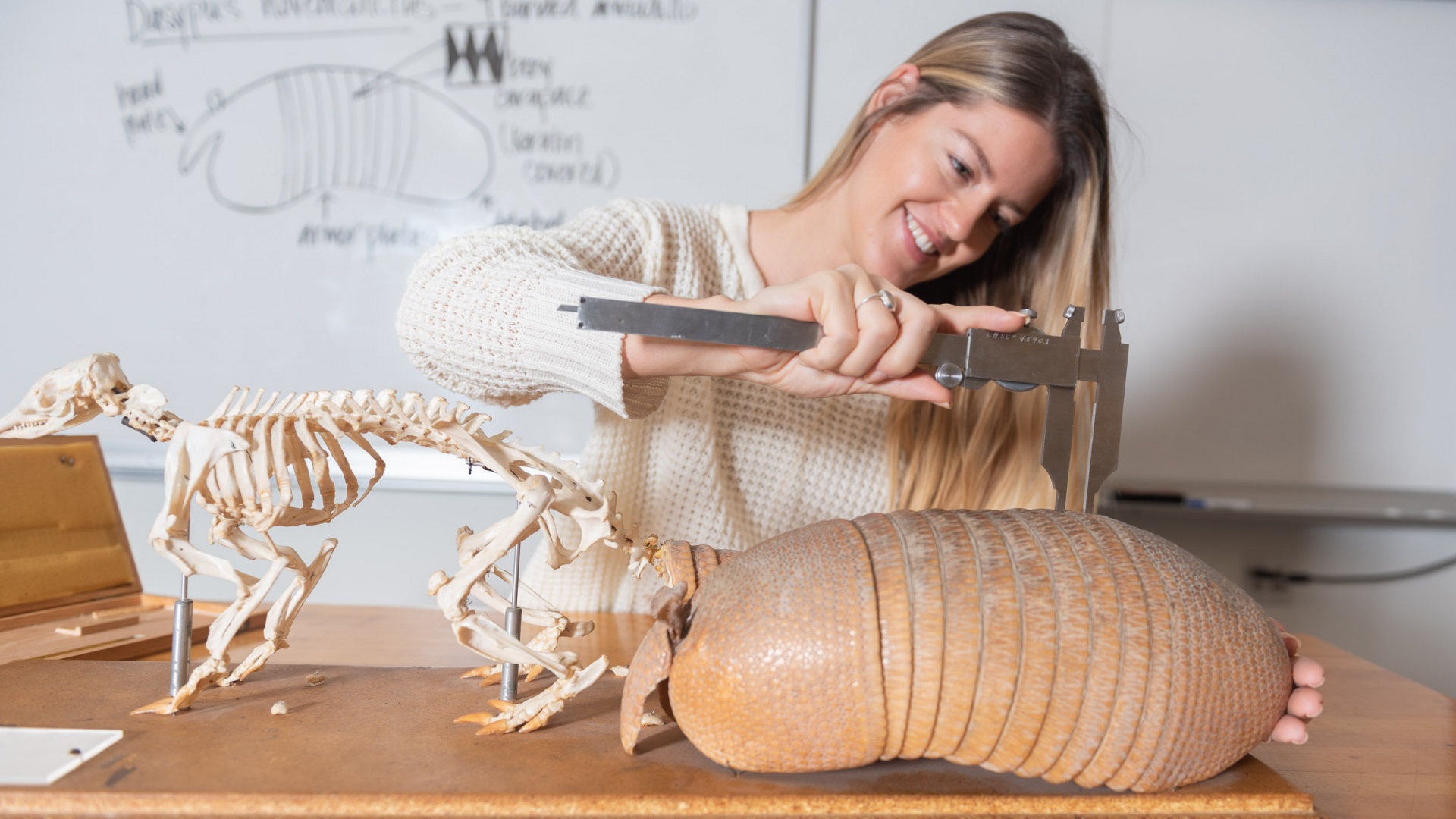 Do you know how often armadillos give birth to sets of quadruplets? Every time. Or that they have sticky tongues and poor eyesight?

Did you know there are 21 species of armadillos, but only one kind is native to the United States? And yes, most reside in Texas. In fact, the nine-banded variety is the official animal of the Lone State. But armadillos have made their way to Southern California.

These are facts graduate student Caitlin Stapp never knew until she began researching the armored mammals in the Mammal Lab for her thesis in biology. She hopes through her research to better understand the evolution and diversity of armadillos by studying their armor with ecology and biomechanics.

“My thesis is looking at the variation of different armor,” said Stapp, whose research is funded through the Richard D. Green Scholarship in the College of Natural Sciences and Mathematics.

“I will be looking at the ecological traits that vary in species, such as habitat -- is the area thorny brush, is it smooth, is it open because they burrow – and how that affects their armor.”

Stapp used her scholarship to visit the Smithsonian this past summer to gather CT scans. She said her thesis largely explores the ecological traits that could cause variations in species. Armadillos have migrated from South America to the United States, primarily in the south-central states, such as Texas, although some have been found in North Carolina and Florida.

“I’m also looking at behavior and the aggression between certain males in different species, and of course, predation and how predators influence the type of armor,” she said. 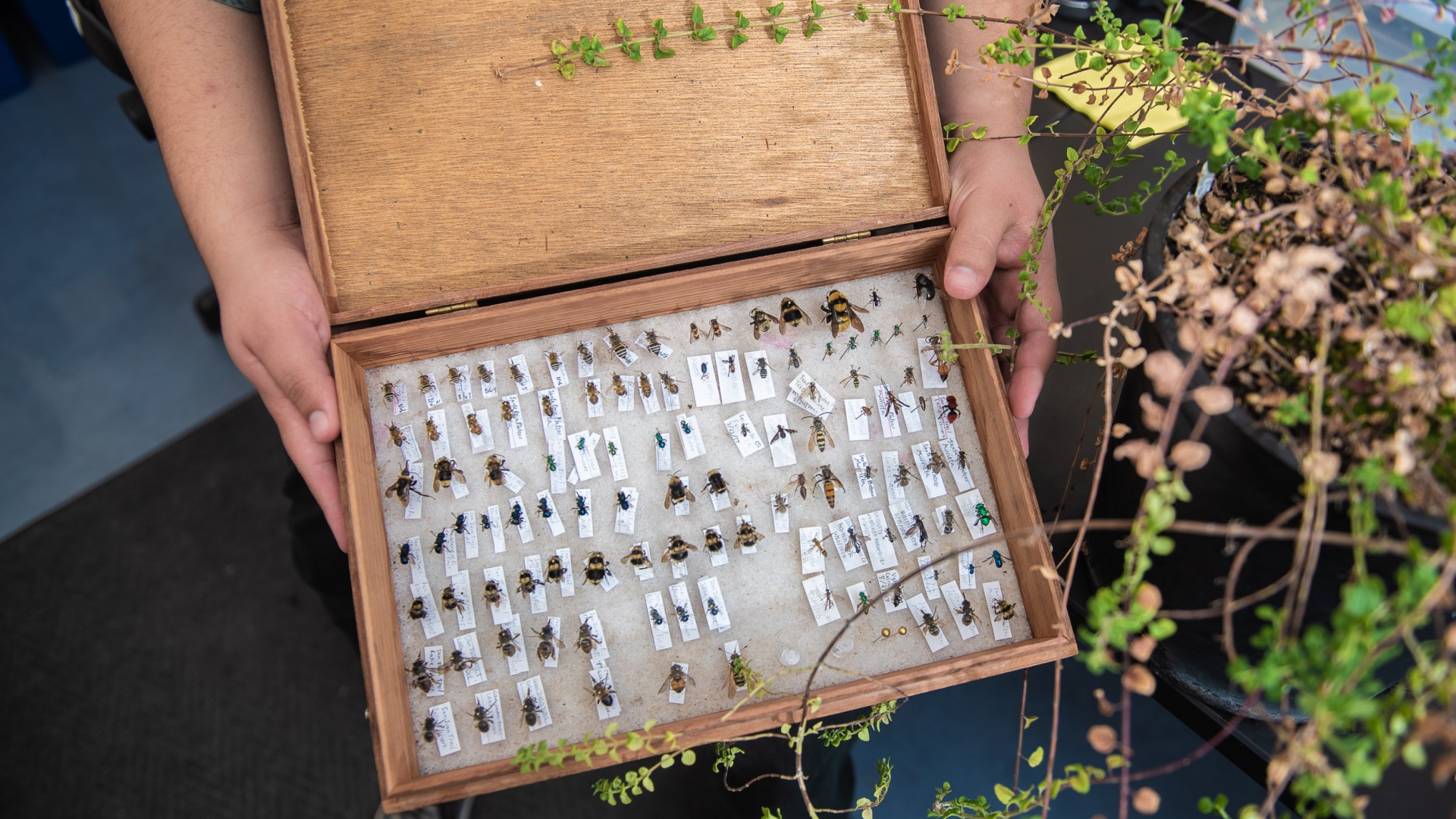 Gregory Cruz’s introduction to bees began in Dr. Dessie Underwood’s entomology course. His passion for pollinators increased after the graduate student learned how diverse they can be, with varying tongue lengths and head sizes.

His interest was piqued further when Dr. Amanda Fisher told him about a rare native mint plant that few, if any, had studied how it was pollinated. Cruz then decided to marry his two interests and is doing his thesis on the San Miguel Savory (Clinopodium chandleri) plant and whether native or non-native bees pollinate the native species.

“The results could elucidate if honey bees may have a negative impact on native plants in a natural setting,” Cruz said. “Honey bees are important in agricultural systems, but this does not mean that their presence is important in natural systems.”

Cruz said the rare research could be useful for conservation if the bee population would continue to decline. The total number of managed honey bee colonies has decreased from 5 million in the 1940s to 2.33 million today, according to the USDA.

Although his research, funded by an NIH grant, isn’t complete, Cruz said what he has discovered is that bees are the only pollinators to visit the San Miguel Savory plant. Pollen wasps and syrphid flies have also appeared.

Help students such as these continue their research by visiting Give to CNSM. 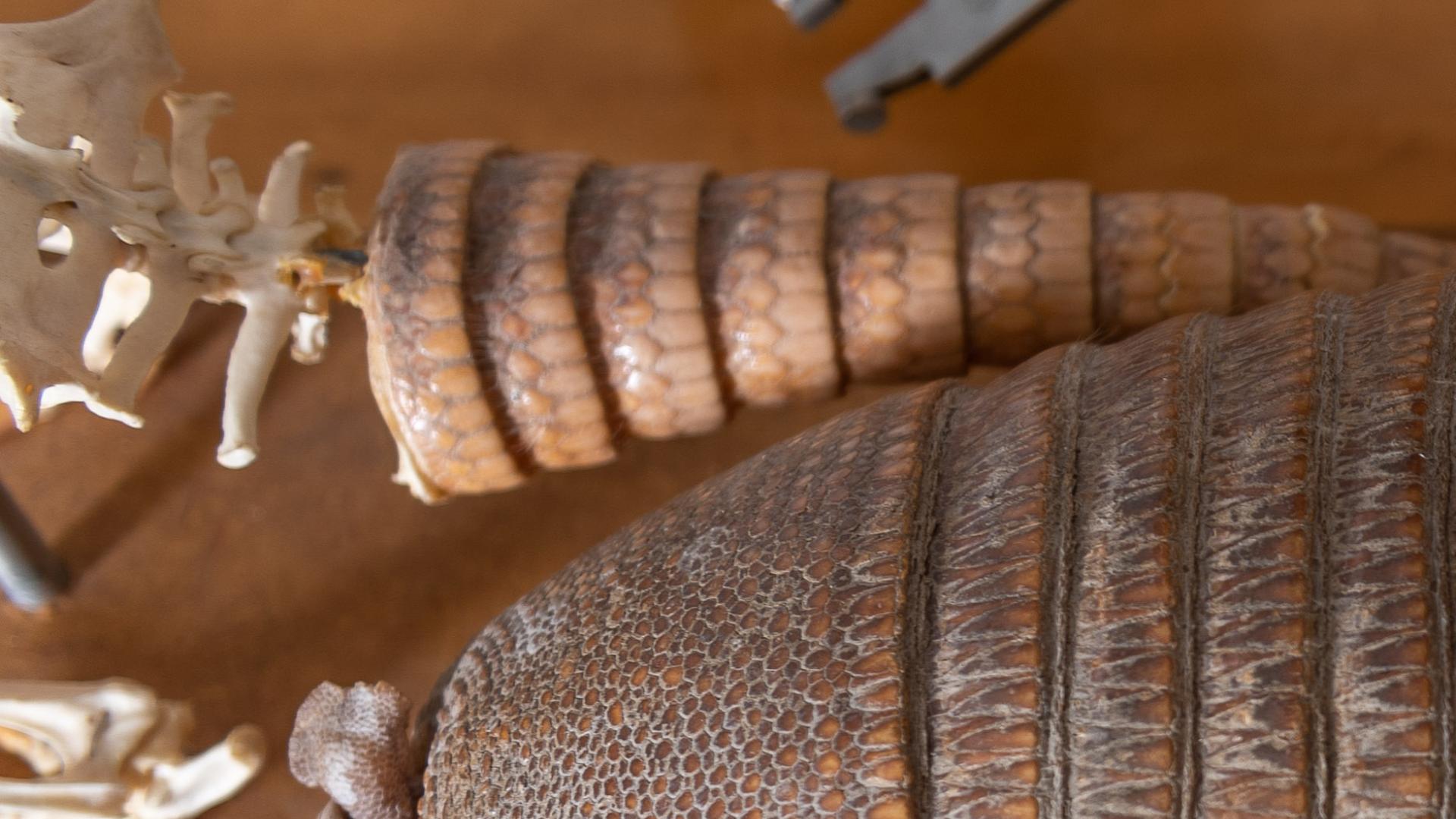 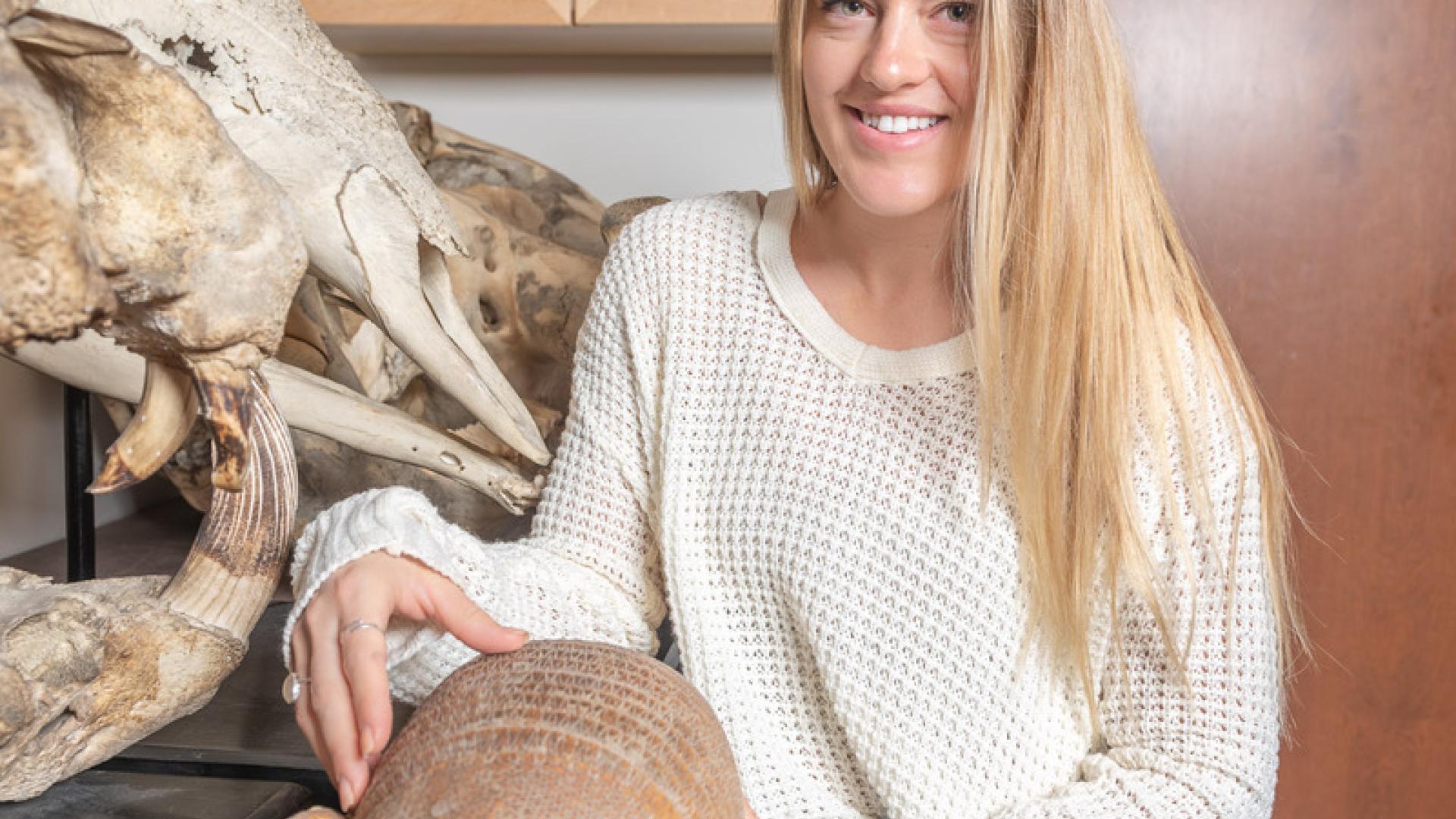 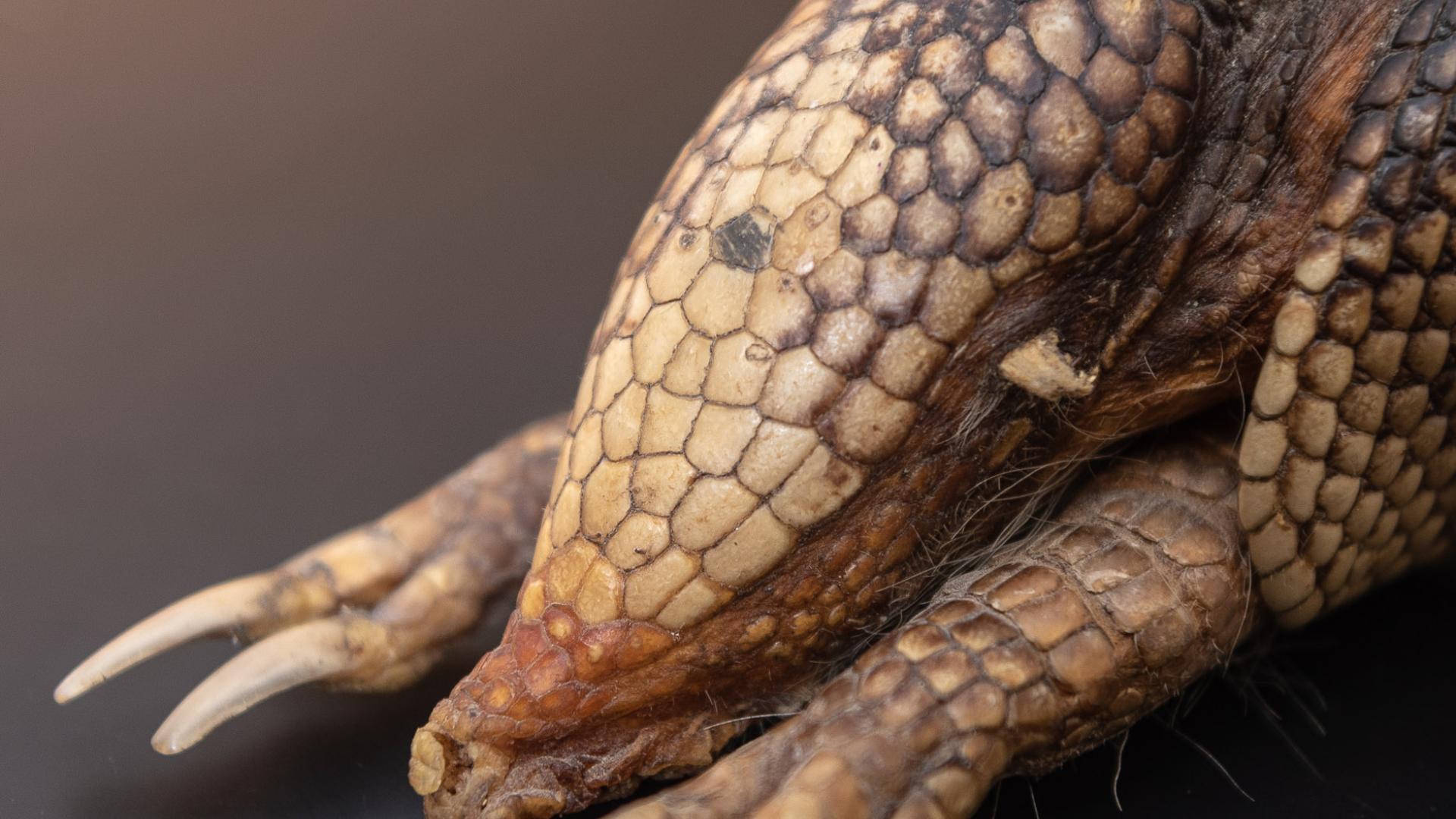 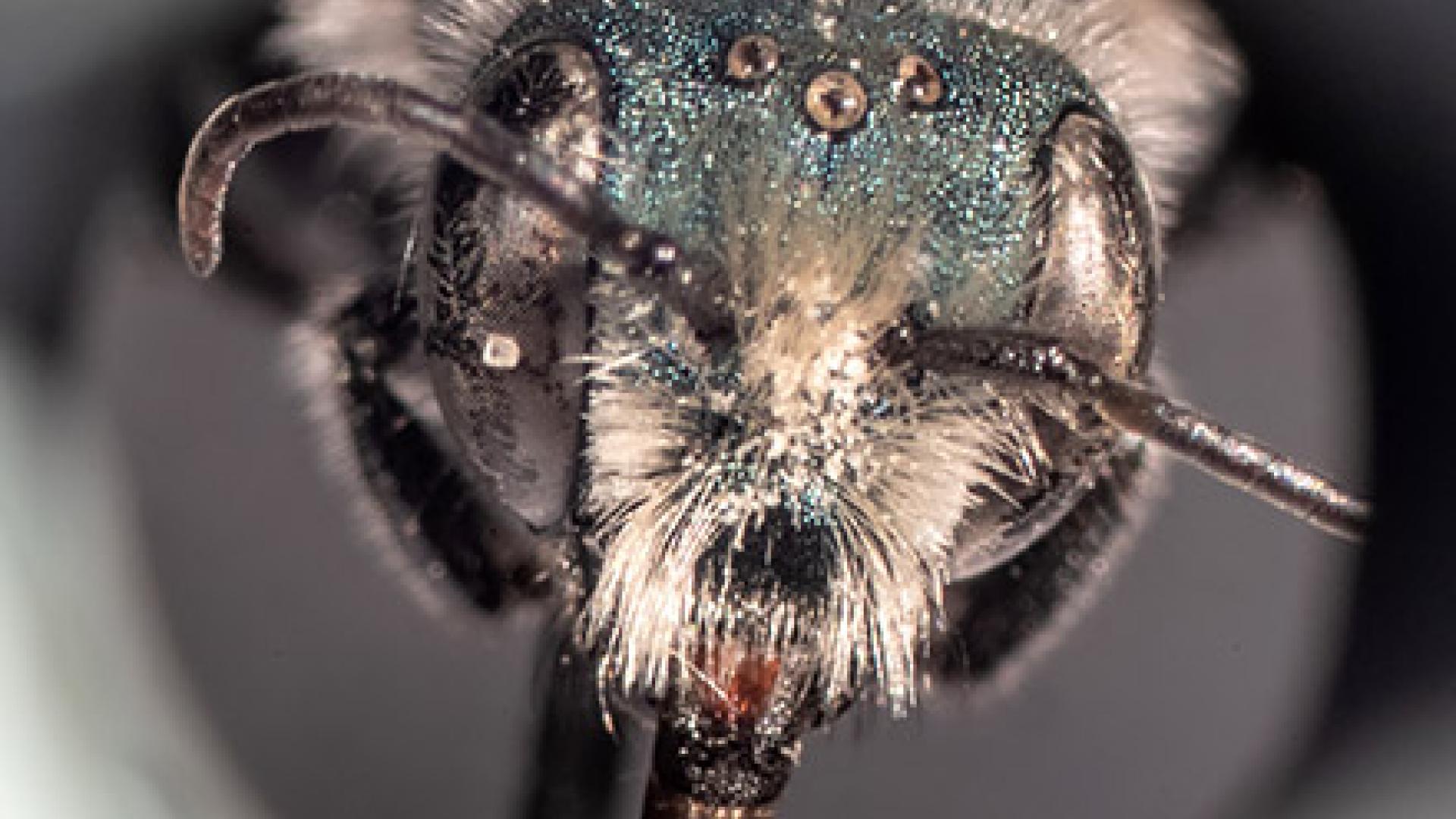 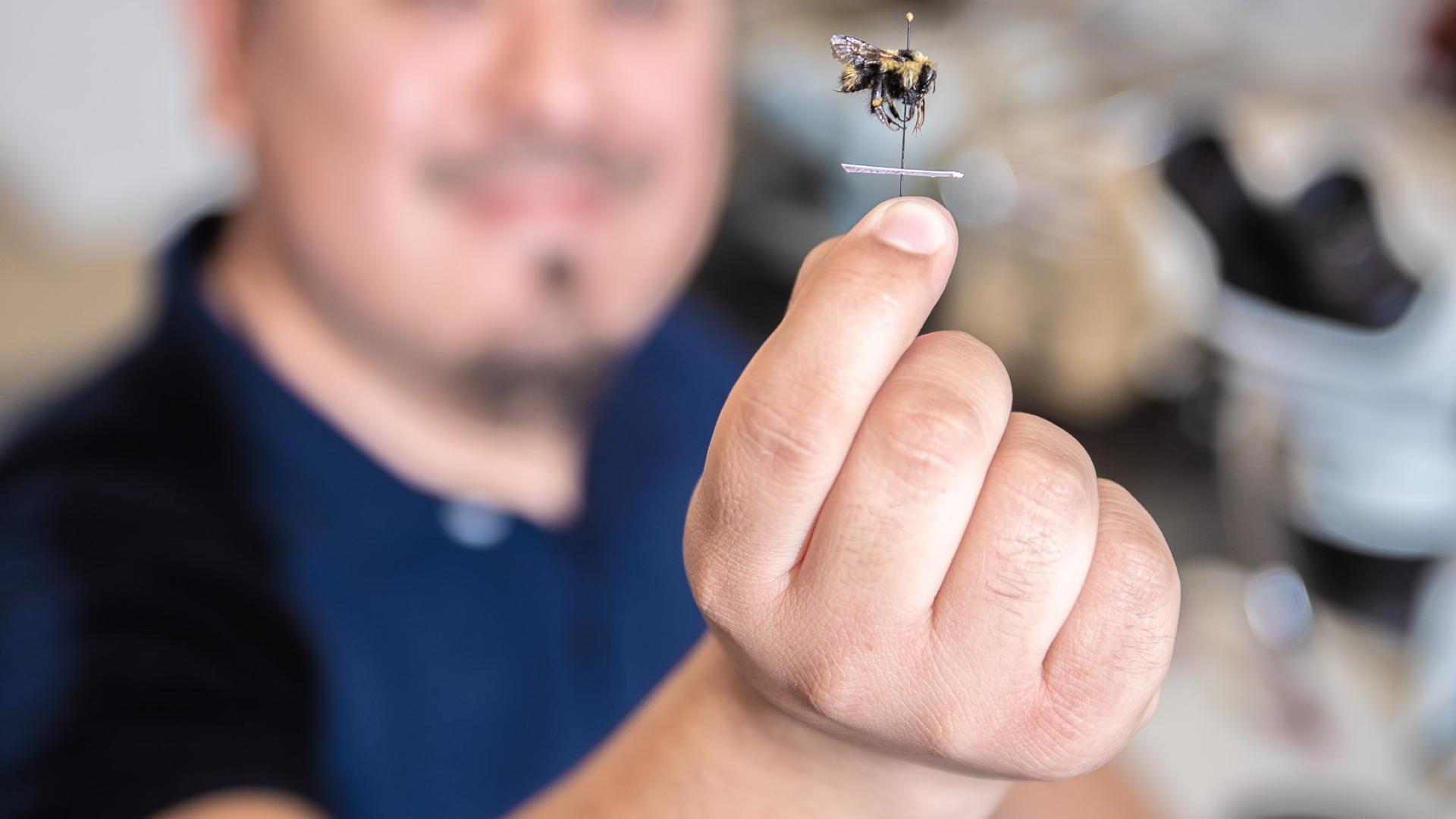 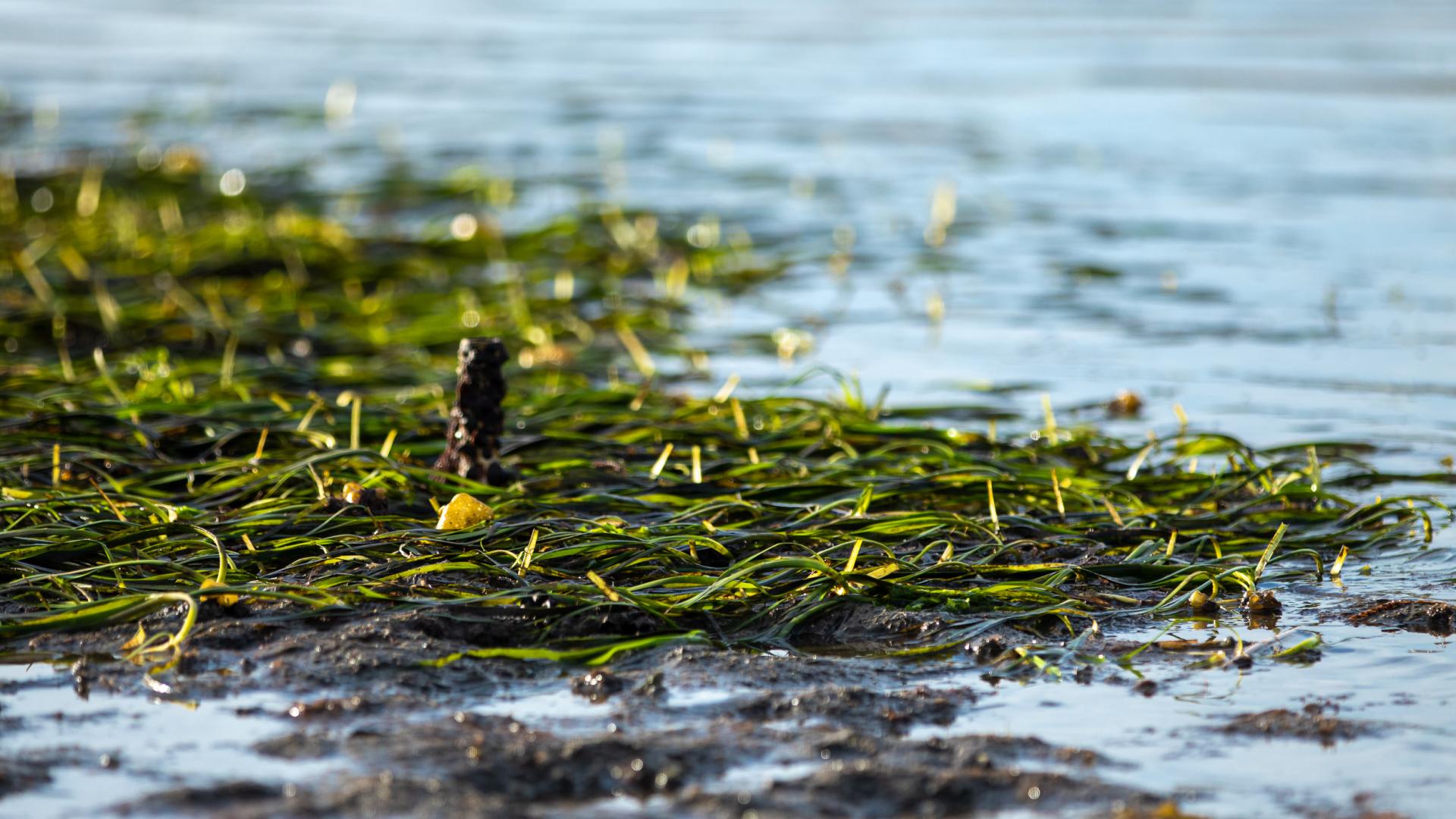 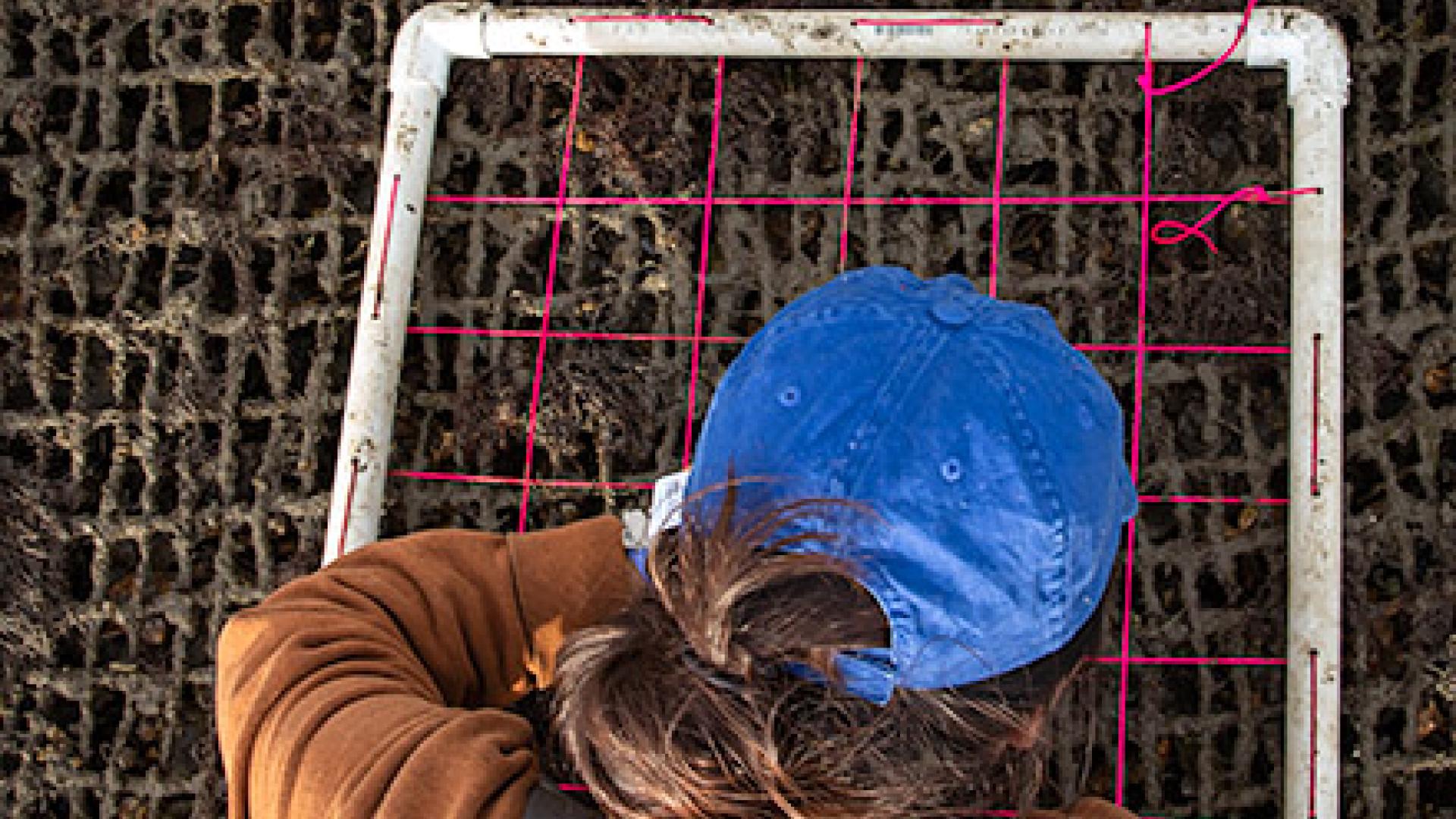