Meet the botanist who keeps CSULB in bloom

It was at an ice cream social where Brian Thorson bought his first plant.

While still in kindergarten, he paid 25 cents each for his first kalanchoe and dieffenbachia, one a succulent adorned with delicate clusters of dainty flowers, the other a tropical plant donning waxy, vibrant leaves. He was 4 years old.

“I swear, that was the beginning of my love for plants,” he said.

Now the botanical curator at Cal State Long Beach, Thorson tends to more than 2,000 plants, maintains five greenhouses and an outdoor nursery on campus, while also overseeing the campus’ efforts to rescue plants that are imported illegally into the United States after they’re seized by authorities.

“He’s sort of this richly textured human,” said Judy Brusslan, professor of biological sciences, who has known Thorson since he studied in her lab as a master’s student 17 years ago. “He has such a deep love for plants, for his friends, for the animals in his life. Anything he gets to know – he’s such a deeply sensitive and caring individual.”

Most recently Thorson’s titan arum, or corpse flower, Phil made headlines when it bloomed for a second time in two years – a remarkable feat for a plant that typically reaches maturity once every 12 years. But Thorson’s work in tending to the campus’ plants and cultivating them for classes remains largely unseen for many students and staff who interact with his work.

“He brings plants that cause us to be naturally curious,” Brusslan said. “He brings plants into a course, it’s not just a citrus, he brings a citrus that’s super cool. Just by having such gorgeous examples, you can’t help but notice the beauty. I think it makes people really appreciate plants.” 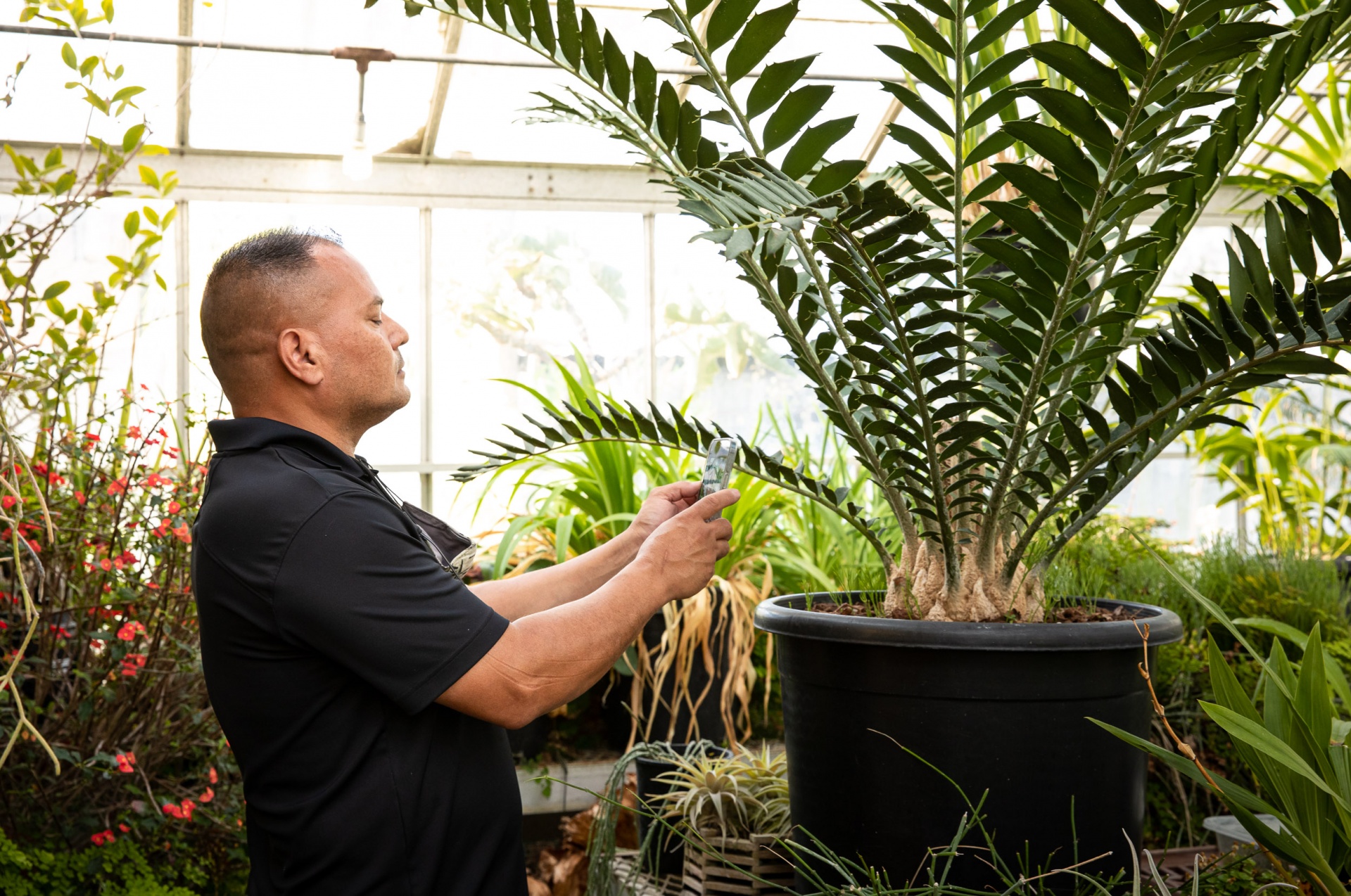 The job of campus botanist for Thorson perfectly dovetails into his passion for tinkering, analytics and problem solving coupled with a natural propensity toward nurturing. Recently while tending to the tropical greenhouse on lower campus, he noticed the leaves on one plant turned an almost imperceptible yellow and immediately suspected the evaporative cooler. When he checked, a belt had slipped off the cooler impacting the room’s temperature.

“Part of it is being a nurturer and wanting to see things survive and thrive,” Thorson said. “I meet people who try to do what I do and fail and fail, and I can give them a recipe, and tell them to check these parameters, and they still fail. And yet I can do it and always succeed. I just never stop. I never take a break.

“This is exactly what I was built to do. This is what I was supposed to do with my life.”

On a normal day, Thorson begins his day at 6 a.m. collecting specimens to be used during biology lessons. The carefully cultivated plants sitting before students have been cared for, collected, labeled and deposited at the lab in the early hours of the morning, well before students even arrive two hours later for a lab.

While students study the evolutionary patterns of a given species or explore plant systematics, Thorson is weeding, pruning and propagating his charges in one of the three greenhouses that sit atop the Hall of Science or two greenhouses hidden behind the engineering buildings on lower campus.

“We have an exceptional facility and an exceptionally broad plant collection” on campus, he said. “It enables students to do research they wouldn’t otherwise be able to do.”

From Guam to Long Beach

Thorson’s journey to Long Beach followed a circuitous path that led him halfway across the globe.

From the ages of 9 to 16, he lived in Guam with his mother and four siblings, harvesting taro, bell peppers, cabbage, papaya and winged beans on the family ranch.

Other times, the family ventured into the nearby jungle to collect hundreds of pounds of the fa ’dang nut in Army duffle bags. The gymnosperm is now endangered on the island because of invasive pests. Thorson grows fa ’dang on campus to one day send back to Guam to help with its repopulation.

At 16, he fled Guam after boys in a neighboring village targeted him because he was gay. He moved to Long Beach, but the transition to living in the U.S. wasn’t easy. He’d grown accustomed to a more collective society. The U.S., by comparison, is more individualistic.

While studying at Long Beach City College he took a biology class for majors and excelled. He went on to graduate from UC Irvine and studied at Cal State Long Beach with professors such as Brusslan. He briefly taught botany at Golden West College but in 2008 he returned to CSULB, this time as the campus’ botanical curator and technician, transforming the ordinary, functional greenhouses into something extraordinary. 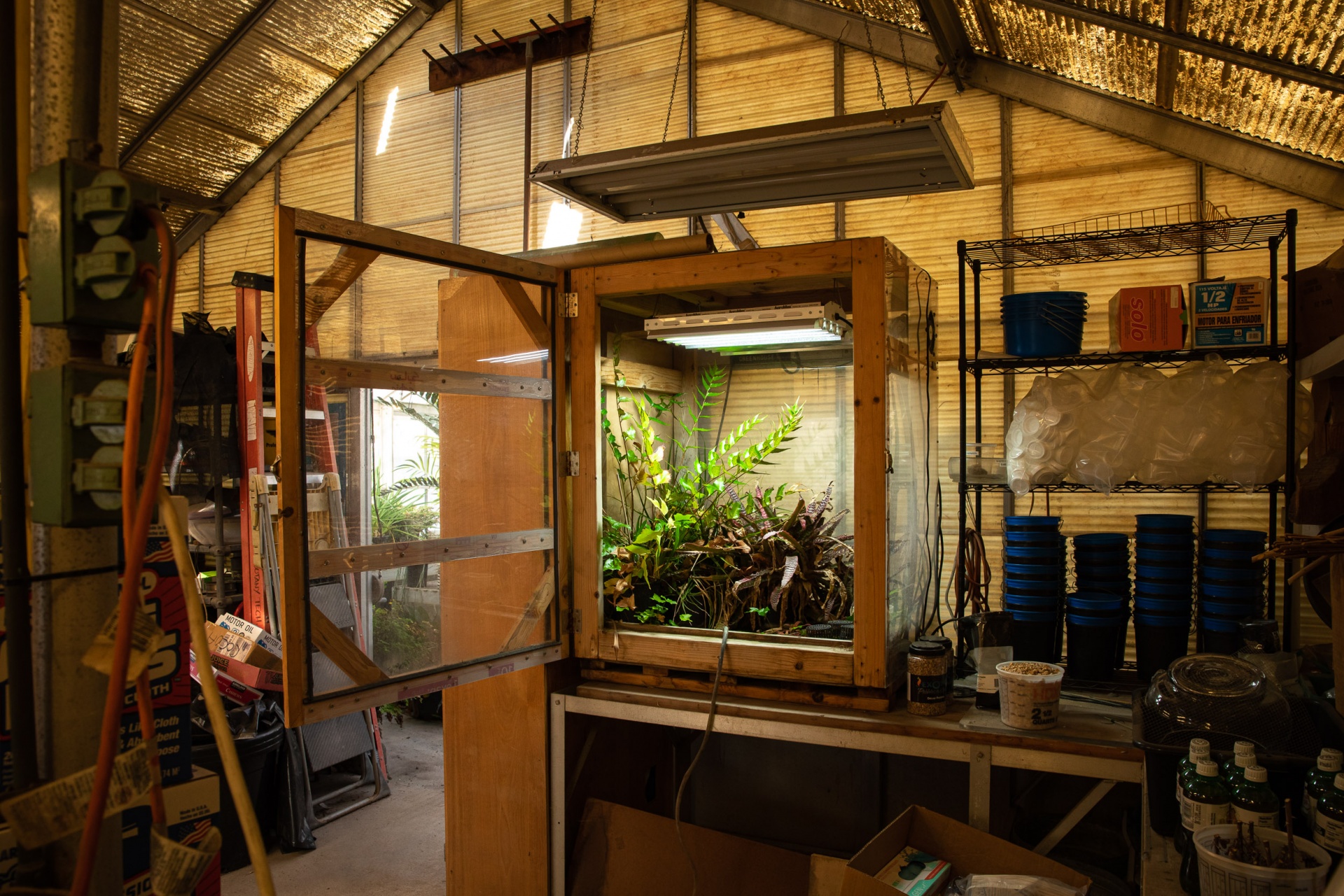 “It was a small college greenhouse,” Brusslan said. “Brian took it to another level. He takes beautiful care of the plants. Everything he brings to those courses, the plants he brings into the courses, one is more beautiful than the other. He’s deepened the collection, there are more rare plants, more species, more collections.”

It’s through his cultivation that Thorson hopes he leaves an indelible imprint on the university.

“This is my legacy,” Thorson said. “I want us to have a formidable, exceptional plant program and plant collection that draws people to our campus. What can I do so people say ‘I want to be there. I want to go there’?”