Plants and animals of the Bight are greatly influenced by ocean currents that introduce nutrients into the coastal ocean. These nutrients are the foundation of the food web here, promoting the growth of tiny floating plants (phytoplankton) which are consumed by tiny floating animals (zooplankton) which, in turn, are consumed by larger animals. And so it goes, forming the complex interactions and relationships between organisms living in the Pacific Ocean of the Southern California Bight.

Satellite imagery does not have the resolution to show most marine life forms in the Bight, but it can be used to show where major occurrences (blooms) of phytoplankton develop at the surface.

As seen in the circulation page, satellite data is an important tool to use when trying to understand how water is moving in the Southern California Bight. It can provide partial or complete coverage of the SCB nearly instantaneously, as well as high spatial (1 km pixels or better) and temporal (daily revisits or better) resolution. Fortunately, satellite data is also available to describe distribution patterns in perhaps the most important group of organisms in the ocean, the phytoplankton.

The concentration of microscopic marine plants, called phytoplankton, can be derived from satellite observation and quantification of ocean color. This is due to the fact that the color in most of the world's oceans in the visible light region, (wavelengths of 400-700 nm) varies with the concentration of chlorophyll and other plant pigments present in the water, i.e., the more phytoplankton present, the greater the concentration of plant pigments and the greener the water. Ocean color data have been deemed critical by the oceanographic community for the study of ocean primary production and global biogeochemistry. "Primary production" refers to the organic material in the ocean that is produced by "primary producers." These primary producers, tiny plants, algae and some bacteria, exist at the lowest levels of the oceanic food web and use sunlight (photosynthesis) or chemical energy (chemosynthesis), rather than other organic material, as sources of energy. Since an orbiting sensor can view every square kilometer of cloud-free ocean every 48 hours, satellite-acquired ocean color data constitute a valuable tool for determining the abundance of ocean biota on a global scale and can be used to assess the ocean's role in the global carbon cycle and the exchange of other critical elements and gases between the atmosphere and the ocean. (Note: the preceding paragraph was taken nearly verbatim from the SeaWiFS web site, background page).

Presently, ocean color data are available from two satellite-borne NASA sensors, as well as numerous sensors from other countries. The first NASA sensor is the Sea-viewing Wide Field-of-view Sensor (SeaWiFS) on the Orb-View 2 satellite platform, which has been collecting data since September of 1997. Additionally, the Moderate Resolution Imaging Spectroradiometer (MODIS) on the Terra (EOS AM-1) platform has been providing ocean color and SST products since the end of the year 2000. Using ocean color data from each of these sensors, false-color chlorophyll-a images indicative of phytoplankton biomass in a particular region can be derived, with chlorophyll-a (among other) products generated on a daily, weekly, monthly, or annual basis. More information on these sensors, and ocean color data in general, can be found in the near future in the planned technology section of this website and also by following the above hot links.

Aside from its global applications as described above, ocean color data are also important for describing the variability of phytoplankton biomass in coastal waters. Phytoplankton biomass is typically high along the coast, due in part to various mechanisms (discussed below) that supply the nutrients necessary for growth (i.e. "plant fertilizer"). Thus, since phytoplankton directly or indirectly affect all higher trophic (feeding) levels (zooplankton, fish, birds, whales, etc.) found in the marine ecosystem, coastal waters typically tend to be among the most productive in the ocean. Humans also benefit from this relationship, given the number of commercial fisheries found in coastal waters that provide us with food. Unfortunately, human populations are quite high along the coast, leading to a substantial influx of pollutants as a result of our activities. (See the pollution section of this website for further details). For these and many other reasons it is important to understand how phytoplankton are distributed in coastal waters, and what factors influence and/or control these patterns. In the following sections, we will use ocean color and other satellite and field data to describe temporal and spatial phytoplankton variability in the SCB, as well as some of the mechanisms (physical and/or biological) responsible.

Much of the observed variability in Southern California Bight phytoplankton concentrations and distributions is the result of small-scale eddy activity which is described in detail in the circulation page of this website. Eddies have the ability to influence biological patterns in the SCB in many ways, including via lateral current transport of nutrients and/or phytoplankton, and also via eddy pumping, a mechanism whereby cold, nutrient rich waters are driven upward within an eddy, stimulating phytoplankton growth in surface waters. Examples of the influence of small-scale eddies on phytoplankton distributions are shown in the figure below, where SeaWiFS ocean color (i.e. chlorophyll-a) data are paired with coincident AVHRR SST images.

The time-series to the left of SeaWhiFS chlorophyll-a and AVHRR SST temperature images shows the recurring cyclonic eddy ("E") that is often found in the Santa Barbara Channel. As a result of the eddy, we see that phytoplankton (via chlorophyll-a) in the western channel are patchily distributed. In particular, relatively narrow (several kilometers wide) bands or patches of higher chlorophyll-a concentrations are associated with a colder and probably nutrient-enriched tongue of water originating offshore that circulates in a counter-clockwise motion, gradually moving westward. Eddies like this in the channel can also potentially introduce colder, nutrient rich waters from deeper depths to the surface in its core region, further stimulating plankton growth. 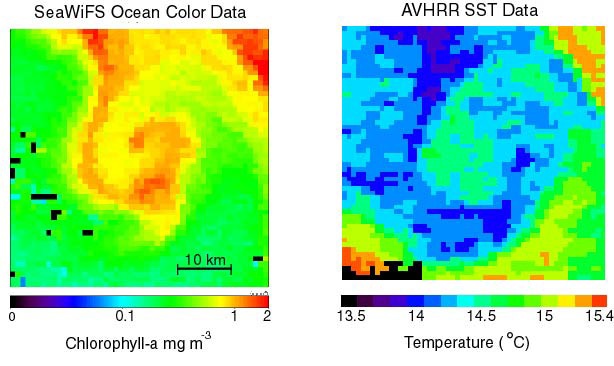 This pair of images shows a smaller eddy south of the Santa Barbara Channel. A cold, equatorward current was split in the vicinity of the northern Channel Islands, with part of the flow headed southeast (where this eddy was found), the other part eastward into the Santa Barbara Channel. We see patches of high-phytoplankton biomass (relative to surrounding regions) associated with colder, presumably nutrient-enriched, waters.

Here, a small ('E') is seen off the southeastern end of Catalina Island, with higher phytoplankton biomass associated with cooler waters.