What caused repeated, remarkably rapid, global warming events that occurred in less than one human lifespan during the late Quaternary? We are investigating the role of methane hydrates (or clathrates), which make up a vast reservoir of frozen methane in ocean sediments. Destabilization of the reservoir through changes in seafloor temperature and pressure may release methane (a powerful greenhouse gas) into the ocean and atmosphere, with dramatic climatic consequences. 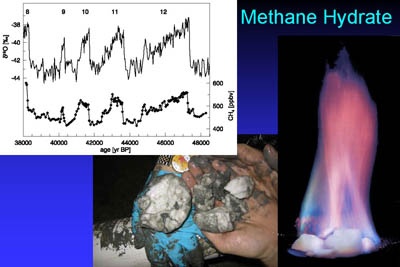 The "Clathrate Gun Hypothesis" proposes that through geologic time the marine methane hydrate reservoir was repeated reloaded and discharged as clathrates accumulated during cold glacial intervals only to be dissociated when triggered by pulses of warmer intermediate water impinging on the continental slopes. This mechanism could have greatly amplified and accelerated global warming episodes.