The tremendous population of southern California, coupled with the activities necessary to sustain and/or enhance people's existence, ensures that a significant quantity and variety of pollutants enter coastal waters. These inputs can occur in any number of ways, including through runoff (urban, agricultural, and storm), the discharge of treated wastewater, and via shipping accidents (e.g. oil spills). While satellites cannot directly measure how much pollution is entering the Southern California Bight, they can potentially provide estimates of how large a region might be impacted by various pollutants, and for how long. For purposes of this discussion, pollutants refer not only to those with anthropogenic sources like pesticides in agricultural runoff, but also those derived from natural sources such as hydrocarbon seepage (liquid oil, tar, and gaseous emissions) that originates from the sea floor in the Santa Barbara Channel and Santa Monica Bay.

The Pacific Ocean within the Southern California Bight area receives pollutants from a variety of sources. Most pollution in the Bight is derived from land, either from water runoff after a rainfall event, from the outfall pipes of waste treatment plants, or from the water discharge of electrical power plants. Such runoff can introduce a mix of industrial and organic pollutants, as well as airborne pollutants that collect on the freeways and roads of southern California. Unfortunately, a lot of trash also makes its way into rivers or bays via roadway gutters. On the bright side, signs like the one above are now commonplace in southern California, indicating that environmental awareness is increasing on the landward side of the Bight.

Beaches near river mouths are often closed to the public after a heavy rain due to high bacterial counts or the presence of high levels of other pollutants. The San Gabriel River becomes a raging torrent after heavy winter rains, and can then transport a variety of undesirable invisible and visible contaminants to the coastal area of the Bight at Long Beach and Seal Beach. Specifically, the dissolved contaminants include lead, copper, zinc, oil and grease, along with solid pollution such as plastic trash bags, styrofoam cups, cigarette butts, bottles and cans. These contaminants can then become entrapped within the normal sediment load deposited on the ocean floor. Here, there is the possibility that the dissolved contaminants can become incorporated into the tissues of organisms that live on or within the sediment, and then on to the rest of the food web within the ocean. 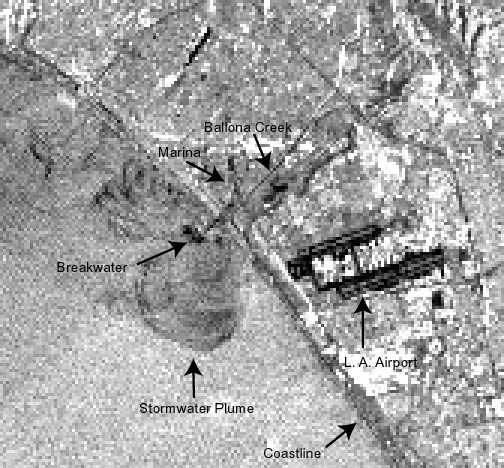 SAR images can be used to identify the spatial extent, and possibly the persistence and/or dispersal of storm water runoff plumes in the Southern California Bight. Following strong winter storms in this region, tremendous volumes of pollutant-enriched freshwater runs off into rivers and creeks, and is subsequently discharged into the coastal ocean where the less dense freshwater floats on top of the ocean water, mixing over time.

In SAR images, storm-water runoff plumes appear darker (i.e. areas of reduced backscatter) than the surrounding coastal waters. This is the result of high concentrations of organics, like oils, that dampen small waves and reduce sea-surface roughness. Turbulence also likely plays a role, analogous to the glossy wake that remains after a boat goes by. Storm water plumes are commonly observed in Santa Monica Bay in the vicinity of the Ballona Creek (near Marina del Rey and the airport) and Malibu Creek discharges, as well as off the Long Beach area near the discharges of the Los Angeles and San Gabriel Rivers. The figures below provide several examples of SAR-detected storm water runoff plumes in these regions. 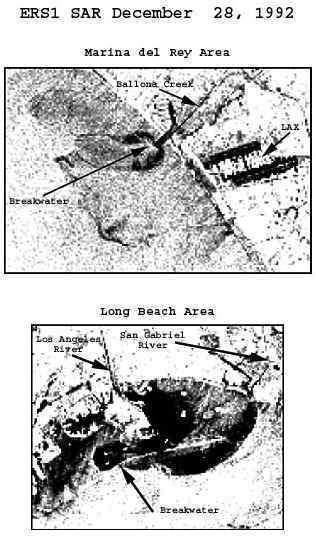 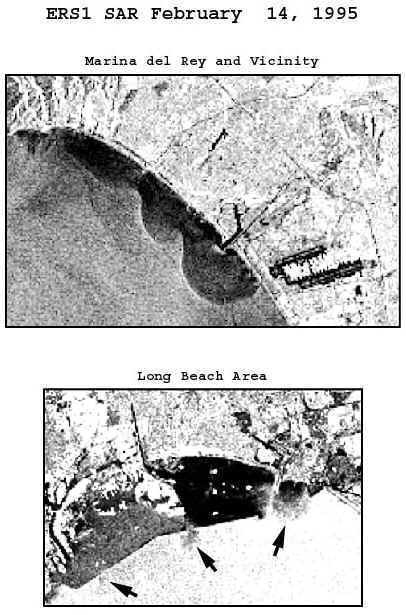 Combined, the ports of Long Beach and Los Angeles form one of the busiest harbors on Earth. Though stringent guidelines are in place to protect the harbor environment, pollution from ships, from the ports' terminals, and from the Los Angeles River is an ongoing problem. Discharge from the ballast tanks of ships, though illegal, does occur. Such vessels, arriving from distant ports of call, can introduce exotic species of plants and animals, causing disruption of the local food web. Discharges rich in nitrogen can generate the rapid growth of plankton, eventually leading to a condition known as red tide that is lethal to some coastal organisms.

In addition to the harbor's negative effects on marine organisms, the diesel engines of the ships and the trucks that haul cargo to and from the ports release large volumes of diesel exhaust into the atmosphere. Westerly winds typical of this area then blow the exhaust inland, contributing to the air pollution in the Los Angeles Basin.

Pollution from the Ocean

Researchers from the University of California, Santa Barbara (UCSB), have found that natural gases and liquid petroleum emerge from fissures, called seeps, on the ocean floor of the Southern California Bight. Being less dense than water, the seep gases rise to the surface as bubble plumes in the Santa Barbara Channel and enter the atmosphere, significantly contributing to air pollution in Santa Barbara County. The UCSB researchers and others have also noted that the liquid oil component of this hydrocarbon seepage tends to accumulate in slicks at the sea-surface, as well as form tar balls that can end up on beaches, and even your feet! Thus, this liquid oil seepage is an important contributor to marine pollution. However, to date it has been difficult to quantify where and when these slicks are found due to their relatively small size and ephemeral nature.

Fortunately, we have found that Synthetic Aperture Radar (SAR) satellite imagery can be used to identify these slicks and map their spatial and seasonal extent. Further, SAR images can be used to examine how long the slicks persist and under what wind conditions they are visible, as well as describe channel conditions that lead to the dispersal of the oil, or worse, its accumulation and/or shoreward transport. This SAR image shows a natural oil slick in the Santa Barbara Channel; it also demonstrates that small-scale eddies (see the Circulation page) can impact the distribution of this oil. 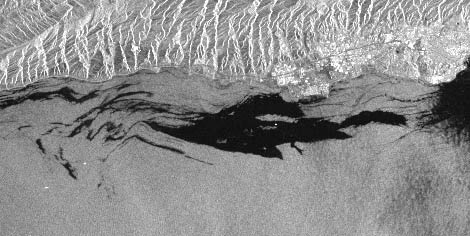 Natural oil seepage is also found in Santa Monica Bay, but to a much lesser extent than that observed in the Santa Barbara Channel. Much as it would appear in a glass of water, oil dampens small waves on the surface, reducing sea-surface roughness and leading to darker regions on the SAR images (areas of reduced backscatter). These images and others like them are part of an ongoing effort by JPL and UCSB researchers to quantify liquid oil seepage in the Southern California Bight and assess its potential environmental impact.

Offshore wells sometimes leak liquid petroleum onto the ocean surface. Such oil spills, if large in area, can be tracked by satellite imaging just like natural oil slicks from the ocean floor.