Perspectives on the Pacific Ocean Offshore of Southern California

This web site exists to inform people interested in learning about the Pacific Ocean offshore of southern California. Found here are satellite and other images accompanied by brief descriptive text passages that provide insights into the various natural and anthropogenic processes and phenomena that occur in this region.

Learn more about the circulation, biology, and pollution within the Southern California Bight. Where possible we have included satellite images to highlight various patterns and processes within the Bight, but other sources of data are utilized as well, including ship, buoy, and other field measurements, as well as land-based and aerial images.

The Southern California Bight is a region that includes coastal southern California, the Channel Islands and the local portion of the Pacific Ocean. This region is referred to as a bight because the characteristic north-south trending coastline found off much of western North America experiences a significant curvature or indentation along the coast of southern California. The Pacific Ocean that occupies this region, from Point Conception in the north to just past San Diego in the south, and extending offshore of San Nicolas Island is characterized by complex current circulation patterns, and is the temporary or permanent home to a wide variety of marine organisms. Impacting this dynamic, important coastal marine ecosystem are the millions of people who reside along the coast from Los Angeles to San Diego. 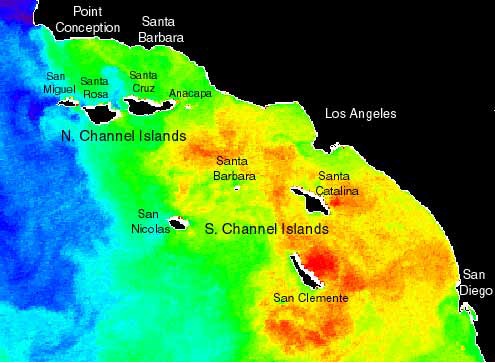 The satellite-derived Sea Surface Temperature (SST) image of the Southern California Bight from September 30, 1995 show that cold, equatorward waters, designated by blue pixels, are visible to the north and offshore (west), whereas warm, generally poleward waters,designated by red and orange pixels, are visible to the south and nearshore (east). This SST image was derived from Advanced Very High Resolution Radiometer (AVHRR) data.

The aerial photograph highlights some of the greater Los Angeles area, with the beautiful Palos Verdes Peninsula in the foreground. On a clear day such as this, Southern California is a wonderful place to live, especially with mountains, ocean and desert so close to each other. These natural resources have attracted millions of residents, with both air and water pollution the unfortunate by-products of continued growth and development in the region.

This project was supported ALERT "Learning and Teach about Earth," California Institute of Technology, NASA, and JPL.